With yet another positive result clocked up at the weekend, Keith McLeod is loving life as player-assistant manager at the Vale.

The striker has had to adapt to his new role as part of the management team as well as a slightly different one on the pitch. But a decent start to the season suggests that the new set up comprising manager Chris Anderson, McLeod and coaches Sean Taylor, Keith Boyes and Mark Beveridge is doing well.

He said: “It was a good win on Saturday but it wasn’t the greatest game. The pitch partly dictated that as it wasn’t a day for pretty football. It was a day for getting dug in and stuck in to your opposition and we did that.”

It continues the steady form that has been put together, with four of the five league defeats coming from teams in the top five. The other came in a tricky away tie to BSC Glasgow who are also in the top half. Vale sit sixth with six wins from 13 matches and McLeod feels they must endeavour to continue to perform to that level.

“As a whole the season has gone really well so far. We had a setback when we lost 9-1 to East Kilbride in the Scottish Cup. I think it was a reality check and it helped us get back to doing the right things.

“We have a plan and an idea of what we want to do. We are maybe not as good as an East Kilbride but we have something to strive for. I’ve enjoyed it so far but it will count for nothing if we don’t carry on doing what we’ve done.

“We won’t sit back because we always want to improve. It’s all new for myself, Ando, Sean, Boyesy and Mark but it perhaps gives us something that other teams don’t have with me and Boyesy being on the park. We can sometimes see things differently to what Ando sees on the side.”

Any improvement on last season would have been welcomed with a top half finish seen as a good achievement. When asked what the team should now be targeting given the consistency they have shown, McLeod tried to remain pragmatic whilst acknowledging the capability within the squad.

He said: “We would be disappointed if we did not finish in the top half – but why not try for top six or top four? There are a lot of different clubs with different types of histories and different budgets in the league which makes it interesting, but to be right in the mix with the likes of Spartans, East Stirling, Dalbeattie and Whitehill is good.”

The striker spent virtually his whole career at Spartans before signing on at Victoria Park for previous manager Mickey Lawson in 2015. He forged quite a reputation as an all action goal scorer in his younger days, but he has had to adapt his game upon reaching his late 30’s.

He added: “I’ve been happy-ish with my performances, but not over the moon. I have a different role now as my legs have gone a bit. I’ve not got the same burst of pace that I had and my role now is to hold the ball up for other guys coming on. It works well with younger fresh legs playing off me.

“I would maybe have liked to have scored more. I’d like to hit double figures and I think I’m on 5 now.”

One of those younger, fresher faces he refers to is Blair Atkinson with whom he has forged a promising looking partnership. Atkinson is in Innerleithen on loan from Spartans and has proved to be one of a number of master stroke signings, topping the scoring charts with ten goals, and McLeod revealed he wishes his partner could stick around beyond his deal.

“He’s an absolute gem of a guy. He wants to learn but he is also quite single minded which has got him goals. He is a fantastic finisher. He’s small and light but he’s a young guy and I’d like to think he can learn from me. I’m not the type of guy who shouts from the rooftops about what I’ve done, but I have scored goals and hopefully he will look at me as someone to learn from. We’d love to be able to keep him here for longer than he is.” 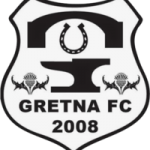 A mixed season so far has meant that Gretna find themselves alongside Vale in a clutch of teams who are battling it out to finish in the top half.

A roaring start saw them win four from their first six before a dip in form and then a levelling out. They now sit tenth – three places and one point behind Vale. Only nine points separate fifth and 14th, meaning three points could be massive for either side.

Since losing 2-1 to Vale in the South Challenge Cup they have suffered disappointment in the Scottish Cup, losing 6-2 to Buckie Thistle in a replay after a creditable draw away to the Highland League side in the original tie.

Vale will be looking to return to winning ways after a promising performance against East Kilbride ended with nothing to show for it.

Chris Anderson said: “We are very much looking forward to the visit of Gretna.

“It was only a few weeks ago that we ran out 2-1 winners but today’s game will be another challenge for us altogether. Gretna have a new manager and will be determined to push us all the way.

“It was great to see James Elliot and Jay Stevens return after injury last week and both are influential players that we hope have put their injuries behind them.

This is the first of five fixtures against teams lower down the table, with a cup game against Threave Rovers in between, and the importance of picking up points and progressing in the cup is not lost on the manager.

He added: “Our next set of fixtures are for me the most important of our campaign to date. We make no secret of our attempts to finish in a strong league position and will have to be at our very best to reach our targets over the next month.”
Previous meetings this season: Gretna 1-2 Vale